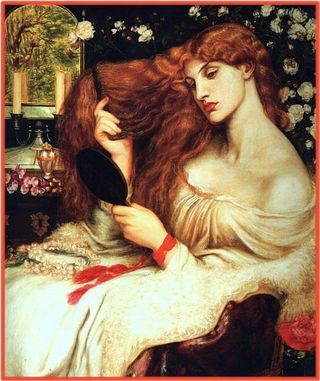 I've been told I'm idealistic and unrealistic..."Ouch, don't hurt my feelings!" I reply with sarcasm. Like that is a reason not to dream or a reason to become cynical. And, believe me, I can be jaded and cynical...but I do believe that the world will always give me what I need. After all, I live in Red's World: A very happy place, where dreams come true and you get everything you always wanted.

But you can't have everything without the cost of hoping or without paying the price of following your truth. I know that as long as I'm truthful to my dreams and live within my values of integrity, I will have no insecurities about the life I lead. And the integrity I speak of is not the same as following a certain set of standards. It's that feeling in your heart when you trust your gut. It's that vast intuitive knowing that we all have if we just listen. We know when we're fooling ourselves or being dishonest in our lives even if by all standards we appear to be upstanding.

Sometimes we blind ourselves because we a create a framework within which we define ourselves and structure our lives. And when we come across opportunities or possibilities that do not fit into this structure, we see them as unrealistic dreams or we don't notice them at all.
Like a camera cannot capture the entire experience, we look at life through a lens that only frames part of the picture. We're only facing one direction.  But if we open ourselves up to possibilities that exist in all directions ...that's reality.

The fear is that in stepping outside the framework, we run the risk of being misunderstood, hurt or even wrong. Oh yeah, and many may disapprove. That's why it's called breaking boundaries, pushing the envelope, living outside the box (in my case - everyone wants to be in my box...but that's another story for another day). Seriously, great things come from those who scoff at limits and try to do what appears to be impossible.

Great minds don't let the fact that something is unrealistic get in the way of reality. Look at electricity, airplanes, going into space and putting a man on the moon. Jeez, we can even talk to someone on the other end of the world without ever meeting them using a tiny little box called a cell phone. Would anyone have believed that these things could happen before they did?  No, only those who were determined not to allow "reality" get in the way of what's real. And that's just the big stuff.

On a smaller scale - by being an unrealistic, idealistic dreamer -  I've always gotten everything I wanted in life, so why not this?

Posted at 03:35 AM in Lessons for Limitless Living, Philosophy | Permalink | Comments (1)

That was one of the realest things I've ever heard in life. Thank you for that.