Last month I wrote about 2 movies I worked on that premiered at the Torronto International Film Festival (TIFF) in September. Both films, RABBIT HOLE and CEREMONY were picked up by distributers and both are expected to be released in theaters soon!! Watch the trailers below.Unfortunately the First Look at RABBIT HOLE has been pulled from youtube by Lionsgate as of October 22, 2010, but the video below is the official trailor...enjoy.

RABBIT HOLE was picked up by Lionsgate for distribution. This adaptation of the Pulitzer Prize Winning Broadway play of the same name by David Lindsay-Abaire is set to be released in Movie Theaters across the nation on December 17th 2010. A drama about how a family deals with unbearable loss with stunning perfomance has started much buzz regarding Diane Weist's and Nicole Kidman's performances...talk of Tony Nominations. So don't miss it. And look for my name in the credits.

Magnolia Pictures has picked up U.S. distribution fights for CEREMONY an indie comedy, written and directed by Max Winkler and produced by NALA Films. This story about a young man's infatuation with an older woman and the lengths to which he'll go to in an attempt to win the heart is both amusing and heartfelt. The release date is not yet determined...but stay tuned. 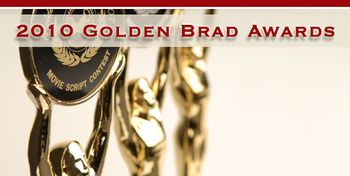 After a BRIEF ENCOUNTER at Studio 54, I'm compelled to share my experience of a tender, tragic and touching love affair...
No, I'm not talking about a late night hook-up I had at a club. I'm talking about the Roundabout Theatre Company's production of the Noël Coward's beautifully written play, BRIEF ENCOUNTER, which runs through to December 5, 2010 at Studio 54 on Broadway.

Director Emma Rice's Broadway stage adaptation (first produced in 2008 at The Kneehigh Theatre) of the beloved 1945 film, BRIEF ENCOUNTER, is brilliantly crafted to capture the essence of the mind-blowing wonder, intensity and confusion that accompanies the chance connection of two married people who fall in love with each other.

Laura (Hannah Yelland) and Alec (Tristan Sturrock) fall in love when a chance meeting at a train station brings them together. But this is not a simple romance. Both are already married when they meet. They tussle with the essential question of how handle the intensity of their feelings for each other within the constrictions of social expectations. Their romance defies reason and unravels their previous notions about what matters in life and challenges the ideals that used to seem so simple and clear to each of them. This production takes the audience through every possible emotion associated with the complexity of these peoples' struggle to do the right thing, honor their love for one another, while staying true to the brilliant connection and passion they have found.

Full of the heartbreaking twist and turns inherent to falling in love outside marriage, Broadway's BRIEF ENCOUNTER is a marvel, capturing the unfathomable yearnings of true love under conditions that make it’s unbridled expression egregious. It's not often that a story of this kind is told with such keen sensitivity to the humanness of the people involved, and with an understanding of the emotional roller-coaster that come with (and between) a romance under these circumstances.

The complexity of the production mirrors the complex human struggles of the story line. It is sheer genius.

"Use your experience to connect, rather than to disconnect or separate you from others."