I had a dream last night. Perhaps I was dreaming because I was told to be careful here in New York City on the anniversary of the 9/11 attacks, but it was vivid. I dreamed that I was leaving New York City with one of my best girlfriends. We were driving up into the country side. It was a beautiful fall day. It almost felt like summer. As we got further away from the City, we started to wonder why we had left. We started to think that there was no reason to leave on this day, so we turned around.

The next think I knew I was in an apartment in Manhattan on one of the upper floors. I looked out the window to see an airplane high in the sky. It looked like it had lost control and was going to crash. I knew from the angle of the plane that it was not going to hit the building I was in, but one behind me, one that was much higher. And then the world crashed and tumbled. We looked out the window to see pieces of buildings broken and strewn throughout the streets. Police, trying to make a path and people coming up on it from side streets with shock and puzzlement on their faces.

I woke up and walked out into my living room at 8:46am - the exact moment that the first Tower was hit ten-years ago today. I turned on the TV to watch the Reading of the Names of those lost and to see the Footprints of the Twin Towers. 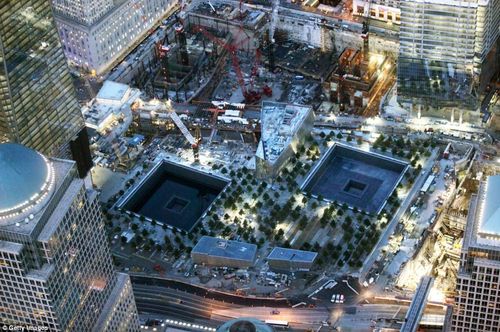 No matter how much time passes, there are some events that are always with us. Today, on the 10th Anniversary of 9/11 we honor those we lost as we look to the future with hope.