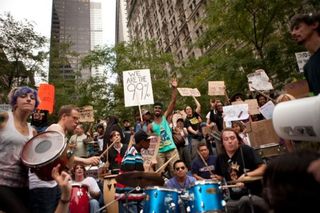 So, I went by Zuccotti Park in Lower Manhattan yesterday for the second time since the Occupation. As I drove past, the drum circle was still beating with half-naked people dancing against greed.

Why do these people prefer to live in a park, and do performance art for free? I'm guessing because it's fun. It's like "Burning Man NYC." And as of today, Bloomberg hasn't cleaned up the park so the protesters can party-on for now!

It reminds me of the drum circle on Venice Beach, Sunday afternoons.Everyone is dancing, smoking weed, and feeling a part of something creative. Unfortunately, like most people who don't have the luxury of being unemployed, I haven't had the time to hang out and enjoy the party at "Liberty Square".

To be honest, I don't really understand what these folks are protesting exactly. I've tried, but even reading their statement on their website, I don't really get what's wrong with greed.

Seriously. Is it the American Dream that they don't like? I understand that they are calling themselves the %99 - but aren't most of us that? Are they protesting the fact that anyone in our great nation has the opportunity to make it to the 1%, or are they simply against the currency system?

The thing is, in this county, we all have the right to get rich. It's what our country is based on. Anyone can become the %1 and have the privilege and benefits that come with having money. Maybe I'm a dreamer but, I like the fact that anything is possible here in the great US of A - even living in a park for weeks on end without food or shelter or adequate toilets. 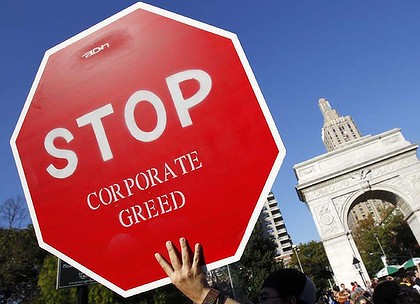 But as part of that 99% myself, I cannot support a cause or a group if I don't know what they stand for? And I do support causes that I believe in, like Gay Rights.

I understand that the wall street protesters don't like the way the rich are spending or using their money, but how would they feel about someone else told them how to spend their money or time? I'm sure that those who are corporate successes don't want to be told, anymore than the protesters do, how to live their lives.

We all make our own way, I have. I live my life as I chose and I don't fall victim to anyone else greed. I only fall victim when I see myself as limited and I blame others for those limitations. But since so many feel so strongly about blaming greed for their life, I've tried to understand. However, researching the goals of the Occupy Wall Street Movement has proven quite difficult. Using their website, even going on Twitter and other social network sites that the movement uses to gather steam for their illusive cause, doesn't prove helpful in shedding light on how they want things to change.

Those brave enough to asked people at the Occupation questions about their demands are given conflicting stories or are met with defensiveness from the protesters, who seem a little angry. "If you don't understand, than you are against us," the protesters say. And since they won't appoint a spokesperson and they refuse to organize themselves enough to give a clear message it's seems that what they want will remain unknown. But they say, "We will be here (in the park) as long as it takes." Takes to do what? Who knows?