I admit I'm a sucker for a good love story, especially one that lives out of bounds and thrives against all odds. The romance of Bonnie and Clyde is a timeless and epic love story that has captured the imagination of our nation for over half a century.

Take that and put it to music and what do you get? In this case, a production that magnificently expresses the story of the romance, danger, risk-taking, wonder and hope of the legend of Bonnie and Clyde.

Although known outlaws, Bonnie and Clyde have always been seen as heroes and celebrities. This production emphasizes that element of their story. Through this show you come to understand, on a gut level, that the reason for Bonnie and Clyde's success was their love for one another. Together they were able to rise above what they had, and where they came from, to make a life for themselves that was beyond anything they would have had separately.

Bonnie and Clyde's inability to live without one another is expressed exquisitely, not only through the music by Frank Wildhorn with lyrics by Don Black (which is beautifully written and preformed), it is also expressed through Jeremy Jordon and Laurie Osnes' embodiment of these two lover through their physical and emotional interactions with each other. The music, harmonies and vocal performances of the score create a world in which you feel a part of this love and desire, not an observer of it.

Jeremy Jordon and Laurie Osnes sweep you off your feet, convincingly recreating the intense connection of these two characters. From the moment they first meet the chemistry between them is real and palpable. There is not a moment where you doubt their desire, tenderness and need for each other. Because there is no holding back in the very physical connection of Bonnie and Clyde (and by physical, I mean PDA relationship on the stage), the touching and kissing has the potential to be awkward or too explicit. But it never becomes either because Jeremy and Laurie's performance is so pure that the tender devotion which underpins the physical is always evident when they touch. 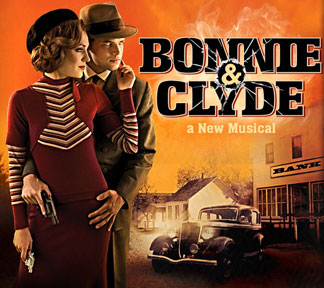 The BONNIE AND CLYDE Broadway Musical works because, as an audience member, you feel like you are let inside their world and allowed to go along for the ride with them. Bonnie and Clyde seem like your friends, not criminals, creating empathy for their plight in life and admiration for their tenacity. They never give up, even when everything seems to work against them. And even when you know that they won't live forever, you route for them to make it through anyway. From beginning to end, you never feel like an outsider looking in - you feel like a part of the it all.