Home About Archives Subscribe
New iPhone Game by Red coming out for Halloween: THE RED WITCH
Where's Red been?

Do you think they came up with the name Sandy for this storm because of all the the sand it would move?

Today, two days after Sandy hit, New York and New Jersey have very different shore lines than they once had. In the aftermath of the storm, beach communities in this area are destroyed, leaving countless homeless. Sandy not only caused damage with it's water, but the excessive winds also spread fires in Breezy Point Queens leveling an entire community, burning at least 80 homes to the ground. Lower Manhattan was hit hard, and was completely dark and under water. Yet, Lady Liberty still stands tall! 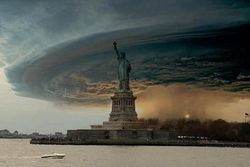 And in addition to all this heartbreaking news, there was more we have to contend with here in New York. Sandy brought this part of the word to a halt. NJ Trains down, bridges and tunnels closed due to the dangerous winds and flooding. NYC Subways shutdown - (even now, until further notice due to flooding that caused more damage than the subways have ever sustained in the past 100 years since they've been running), and power outages throughout NYC and NJ that potentially will cause some people to be without power for weeks.

The good news is that Mayor Bloomberg, NY Governor Cuomo as well as Governor Christie of NJ were as prepared as anyone could be for this disaster. Creating evacuation zones, closing bridges and tunnels, shutting down public transportation ahead of time, keeping the public constantly informed on the plans and how to stay safe with updates on the storms impact (and now they are providing estimates of rebuilding and recovering). Doing everything they could ahead of time, during and after to make previsions and preparations to minimize the impact of this extreme storm. Helping people with information on how to manage the potential and now real devastation of the hurricane. Because of this, though tragically some lives were lost in the storm, more people were safe than harmed. For that, we are very lucky. Lost homes and and possessions is a hard thing to take, but surviving this event alive and intact puts those losses in perspective.

I was one of the lucky ones who was minimally impacted by this storm. There were high winds and rain in my Manhattan neighborhood, but no damage or real danger -- I never even lost power. Still, I am grateful for all those who have come in to repair our City and surrounding areas. No matter were you are, you can help....give to the Red Cross or other hurricane assistance agencies to help with this recovery process.

My heart goes out to all those who were not as lucky as I. To those who are now trying to pick up the pieces of their former lives and trying to figure out how to move on -- find a place to live, deal with the loss of friends and and family that were harmed or died in the storm, and go forward from here.

We are strong here, and we will recover from this.