Cinderella on Broadway: as magical as ever!

I went to see the revival of Rogers and Hammerstein's CINDERELLA on Broadway a few weeks ago and fell in love all over again. Maybe I'm just a sucker for a good love story, but I know this musical inside out, and have since I was a child. I grew up watching it, listening to it, and singing every song . . . in my own little corner.

I admit I was a little skeptical when I heard that they had "updated" it, especially given my familiarity, and childlike awe for this musical. It's kinda like love, the second time you fall it's almost never as powerful or wondrous as that first magic crush. So you really don't want to go, if it's just going to hurt. Trust me, I've had devastating revival-depression before (See my review of the 25th anniversary reworked version of LES MIZ).

But Musical Theatre is my one true love, so I put my fears aside and went. I even let myself feel hopeful enthusiasm along with of all the other audience members. As we entered the theatre, I was filled with anticipation. I was so excited about the possibility of being swept off my feet again, I bought myself the Cinderella tiara from the theatre souvenir counter. AND I wore it, feeling as if I was going to the Ball to meet my Prince.

Uh-oh! I'm in trouble now. Worried that revival might break my heart beyond repair, I took my seat.

Then, something amazing happened. The overture began and, suddenly, I was lost in the music. Played flawlessly by the orchestra, it sounded even better than I remembered -- perhaps it's the new orchestration. Still, I knew every note and had to bite my tongue not to sing out the news!

If you are unable to view video on your devise, push the play to watch the Cinderella on Broadway Trailer.

"It's possible, it's possible!" I was completely caught up in the show from overture to ovation. It was as magical as I had dreamed it could be.

I love the updates too, they all were perfectly consistent with truth of the story, and the real meaning behind love.

Cinderella's strength came through in Laura Osnes' performance. Her voice is Disney beautiful, as is she. Osnes is very believable as a girl who has found a way to make her lot in life (being basically her step-mothers and sisters handmaid) tolerable. Without an ounce of bitterness, this Cinderella is smart. She finds joy in reading and learning, and never falls victim to playing the victim to her circumstances. Instead, because of her own understanding of limitations, she is kind and empathetic towards others. This quality come through in her desire to help people champion their causes to make their lives better. Laura Osne's Cinderella comes a cross as sincere -- a girl who dreams, yet sees the world realistically. (Side-note: I also absolutely LOVED Laura Osnes as Bonnie in Frank Wildhorn's BONNIE & CLYDE.)

The prince, played by Santino Fontana, is just plain funny. His voice is so gorgeous, it's enchanting. If he wanted to sing to me all day, I might even consider marrying him, too. Though this prince has his own reservations about running the kingdom, it is clear that he will never be truly great without Cinderella's savvy. Nice touch, new book writer, Douglass Carter Beane!

Speaking of the new book, I loved that there was a new character added, Jean-Michell (Greg Hildreth), who challenges the prince to make the kingdom a better one while also providing another quirky love-storyline with one of the "evil" step-sisters, Gabielle (Marla Mindellle). I didn't even mind that Ann Harada's Charlotte is the only one singing the Sister's Lament. She's funny and endearing in her evil ways. But one of the best played under-appreciated roles was Lord Pinkleton (Phumzile Sojola), his voice is delicious and his demeanor is hilariously formal in his tights. 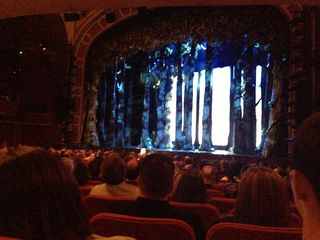 The visual impact of the show is magical - from the set, designed by Anna Louizos (See my illegally taken photo of the stage), to William Ivey Long's stunning costumes (pictured below, behind me and my friend outside the theatre) Amazingly, every magic transformation happens on stage -- right in front of the audience. No lighting tricks necessary when there is true magic. This is the stuff of real theatre. This is why we love Broadway Musicals.

Don't miss the magic! From cast to music, from book to setting, there is nothing but wonder to be had with this brilliant production of Rogers and Hammerstein's CINDERELLA. We all deserve a night at the Ball.