The Talent Behind WHAT MAISIE KNEW! 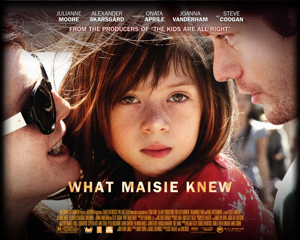 What Maisie Knew is one of my favorites, both as a project I worked on, and as a film. This movie, based on a modernized version of Henry James 1897 Novel, was beautifully shot and smartly cast (and crewed).

Since its premier at 2012 Toronto International Film Festival, What Maisie Knew was nominated for the Tokyo Grand Prix at the 2012 Tokyo International Film Festival, and was chosen as the New York Times Critics' Pick. It's done well in the indie film world, and continues to gather more fans. Now available on iTunes, Amazon and Vudu, What Maisie Knew is definitely worth seeing.

Push Play to watch trailer if you cannot see video on your device.

Directing team, Scott McGehee  and David Siegel, knew what they were doing when they cast this film. The chemistry and talent of the actors is why this movie is relate-able to all of us, even though it's shot from a child's perspective. Seeing the world through a child's eyes is part of the magic that Onata Aprile brings this to life as Maisie, which won her the "Outstanding Achievement in Acting Award" at the 2013 Newport Beach Film Festival.

Beside Onata Aprile, the other great talent who was unknown to most American audiences before this film is Joanna Vanderham (Pictured here with Onata  during the filming of What Maisie Knew).

Joanne's preformance as Maggie made me cry and laugh and feel. Working with her was a dream, so I am happy that she is now playing more and more visible roles -- like the role of Denise in the PBS Masterpiece Classic Series,The Paradise. If you haven't started watching it yet, you should!

Soon, Joanna can be seen playing Pamela in Dancing on the Edge, a 2013 British BBC drama by Stephen Poliakoff, which will air on Starz as a miniseries. It premiers October 19th at 10PM, so set your DVR or whatever it is you these days do to make sure you don't miss the next big thing in TV. That's what Joanna Vanderham is quickly becoming -- the next big thing!

The more I see, the more the talent of What Maisie Knew amazes me.